Rossie (see asterisk, bottom) and I have been friends for almost exactly five years now. Evidently a supreme being felt that this half-decade-versary was the time for us to be having exactly the same experience, at exactly the same time, a mere 1,000 kilometres away from each other (and each totally none the wiser). I will start with my morning (definitely the more embarrassing of the two). As you know (and if you don’t – why not? – scroll down and read my ruddy last post (I hope you’re feeling suitably chastised)) on my last night in Nice I enjoyed a classic Salade Niçoise et un verre de vin rosé. What you don’t know as of yet is that I had been attempting to complete four nights of absolute sobriety in Nice, and also that the vin rosé was just the first drink of the evening. Following dinner I moved onto the dingy Irish pub down the road (only because I wanted to watch an England World Cup Qualifier (I promise I’m usually much more of a classy bird)), and consumed two extortionately priced and (for British standards) extortionately alcoholic half pints of La Chouffe (which happens to be the very first drink I had when I arrived in Ghent at the very start of my trip (no wonder it got off to such a good start)). With my new friends in toe, and England 4-0 up, when the match was over we headed to a nearby cocktail bar to celebrate. Here I had a mojito. And that is all I drank. Period (said in an annoying American accent). However. The Salade Niçoise (as delicious as it was) was not overly substantial (no new potatoes in sight (was it even an authentic Niçoise?)), and I had had a few days off the old travellers’ Achilles heel – alcohol errrday. This all conspired against me the next morning to equal an horrifically hungover Rachel whose alarm went off at 6.45 am and who had to get an EIGHT HOUR coach to Lyon (and I suffer from travel sickness at the best of times).

The first sign that this was more than just a sore head was when I arrived at the airport (from where I was catching my coach). I needed something (anything) so bought a cappuccino (with sugar (and I never have sugar in my coffee)) whose froth made me feel positively queasy. I love a cappuccino and I love a cappuccino’s froth: something funky was going on. But I kept my composure. I boarded the coach, it got on the road, and I got started on brekkie: natural yoghurt with blueberry compote and whole blueberries. It was rather good! I thought this had turned things around for me (blueberries are a superfood afterall). Fast forward thirty minutes and things had taken a severe turn for the worse. I was feeling very travel sick. Like, EXTREMELY nauseous. I put my earphones in for some distraction. I managed about twenty minutes of Ed Sheeran’s ÷ before I had a rush of OH MY GOD I AM ACTUALLY GOING TO BE FULLY SICK RIGHT HERE, RIGHT NOW. This was not overly desirable as I was one hour in to an eight-hour bus ride, with plenty of passengers surrounding me that would not, I believe, take kindly to being vomited all over. I had to act quickly. I ripped out my headphones (sorry Ed), undid my seatbelt (yes I do wear my seatbelt) and made a dash for the onboard toilet. Luckily it was vacant (the potential outcome of this story had the toilet been engaged is truly not worth thinking about). I got in, I shut the door and I was violently sick. EVERYWHERE. And it was full of half-chewed blueberries and compote. It was like a live-action Jackson Pollock creation in the confines of the FlixBus WC. And when I say it went everywhere I’m not exaggerating. Some of it went in the toilet, no problem, but cleaning up the 40% that was splattered all over the seat, walls and floor was not the most enjoyable activity I’ve partaken in. (Especially on a hangover.) (Sorry for the detail (just feel glad you didn’t have to experience it).)

Back in my designated seat, feeling rather delicate but definitely better than before, I got back to my most overplayed album of all time. I was going for the eyes closed, music load, breaths deep strategy to survive the rest of the journey. And then my phone pinged. Rossie had been having a somewhat below par morning as well. Turns out this sickness bug I had picked up had made its way over to the UK. (At least we were both suffering I guess – we could share stories later.) Rossie’s sickness, however, was a bit more unrelenting than mine (although ferocious, my episode in the toilet was, thankfully, the extent of my indisposition). Her’s was almost debilitating and, after hours of trying to help it subside, there was a big question mark as to whether her flight to Lyon booked for later that day would be caught. (I tried to ease the situation by regailing her with the story of my similar ailment – gory details and all – but I’m not sure whether this helped or made things a lot, lot worse.) We were in no man’s land for a period before I received the confirmation that Rossie would (extremely regrettably) not make it over for our long weekend in Lyon. Obviously I was super bummed, but in a seriously groggy state myself I could understand the lack of will to get on an airplane, on your own, when feeling utterly shoddy. I was sad, but I got it. (We had booked an Airbnb so I had a private apartment and a DOUBLE FRIGGIN’ BED all to myself to look forward to!) Some more time passed (it’s hard to remember exact timings as I was still severely hanging) when my phone pinged again. (I thought maybe it was Ed, just checking in.) It was Rossie. The message read as follows (with no punctuation, emojis or kisses (so I knew this was serious)): I’m gonna try again. What the…?!? Next thing I know – she’s through bloody security and about to board the plane!!! And in four hours time I was meeting her from the airport shuttle in Lyon to begin our long weekend away. Now that’s what I call girl power. 💪🏻❤️👯

Now onto the city in hand: Lyon. Wonderful. Just wonderful. It reminded me of Britain a bit (in a good way) and I can definitely imagine myself living there. (I am seriously considering moving to France for a year (while I still can (thanks Boris)) and Lyon is a serious contender on the location front.) The city is cool, quirky and creative, and not really very touristy which, after four months of Tourists R Us, was a big plus. I decided to walk the forty minute stretch from the bus station to the Airbnb (due to the still very prominent hangover), which did me the world of good (fresh air plus a little exercise (I can call it exercise when there is an 18 kg backpack involved) was just what the doctor ordered after the longest eight hour bus ride), that is until I reached the street on which the apartment was located and the heavens opened like a shark’s mouth at the faintest hint of blood. Once more in the run up to welcoming a guest from home I was thoroughly drenched and a quivering, sodden mess. Marvellous. It didn’t help that I also couldn’t actually find the entrance to the apartment for a good five to ten minutes, so I was now a cold, wet, frustrated and still marginally hungover backpacking embarrassment. (The cold that ensued from this less than ideal quarter of an hour is still not fully gone now (three weeks later) (please send lots of healthy thoughts (and a stash of lemon and honey strepsils)).)

I eventually managed to locate the apartment, find the keys, make it up the flight of stairs and unlock our pad for the next three nights. And what a lovely little home it was. The biggest studio I have ever seen, there was a huge double bed, huge flat screen TV (not that we even tried to turn it on (too much gossiping to do)), kitchen area, breakfast bar situation (love a breakfast bar situation) and loadsa loadsa floor space so we weren’t cramped at all. Too good to be true? Well, yes, there was a little hitch. A little hitch which came in the form of the flush for the toilet. I went to the toilet before Rossie arrived and struggled so much to even work out where the flush was that I had to contact our Airbnb host with the humiliating question: how do you flush the toilet? (I was praying it wasn’t something obvious that would make me look like a total wally.) The reply came: Sorry I forgot to tell you! [Not the most reassuring first line of the answer to that specific question.] You have to press the bottom several times 🙂 [Not quite sure a smiley is appropriate here.] don t worry press lot. First thought: I bloody well hope she means the bottom of the toilet as opposed to the bottom of the user. On closer inspection I think she actually meant ‘button’, but it was oddly enough situated on the bottom section of the toilet, so who knows what she was actually referring to. Anyway, I pressed away. A lot. I actually counted 60 presses before the flush choked into action. When Rossie arrived I got her to try, to see if it was just me doing it wrong, but she struggled too. I went with the index finger and her approach was the thumb. We were both getting sore. One time I got to two-hundred presses and still no joy; Rossie had to begrudgingly take over. And then we figured out the trick: it was pure speed. That was all the was too it. Hammer away at it with enough momentum and you could get it going in fifteen pushes, maximum. Sometimes – if you were really lucky – it even went on the first press (we both achieved that once and couldn’t have been more thrilled for ourselves and each other). I couldn’t work out whether this bizarre, enforced flushing ritual felt more like pleasuring or resuscitating the lavatory, but, in any case, neither is best carried out in the bathroom, especially when there is a fresh whiff of excreta in the air.

I realise I have digressed – again – to toilet-related nightmares. I do apologise. On a more savoury note, we had a thoroughly great time exploring the city and catching up over delicious food, cocktails and wine, making a name for ourselves throughout the entire city as Those Bloody British Selfie Stick Wankers (the day I can successfully take a selfie without the stick ruining the shot will be a very proud day indeed). Other than visiting a beautiful basilica (the most beautiful basilica I have ever visited) we didn’t really do that much, which is often when you have some of the most precious moments while travelling. And Lyon has definitely been a highlight. Unfortunately she did get on the plane home at the end of our stay, so I was back on my own once more (for two brief nights in Grenoble before guest number four came to join me in Marseille…).

*Similar in every detail, except: Ross was a girl (let’s call her Rossie); it was Rossie getting on the plane, not Rachel; the desired outcome was that Rossie did get on the plane. (Glad that’s sorted. Now for all of you who don’t have a clue what I’m referencing: we are no longer F.R.I.E.N.D.S.) 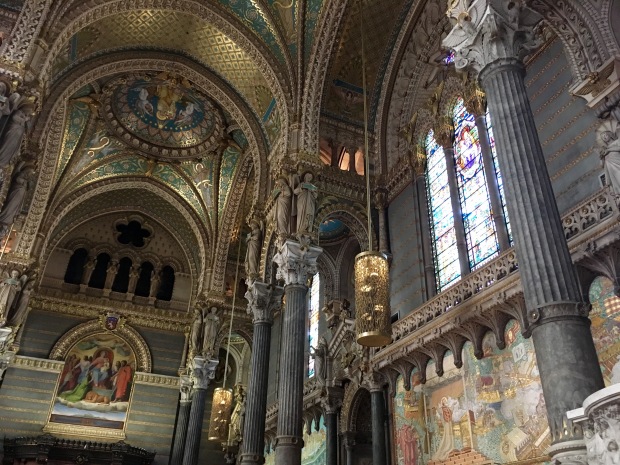 2 thoughts on “DID SHE GET ON THE PLANE? (A Ross and Rachel Situation*)”